No Result
View All Result
NEWSLETTER

Pay Off Mortgage Early: He Did It In 2 Years.. and Regrets It

This guy’s story is one for the books. Why?

He paid off his mortgage in just 2 years. Wow! That’s amazing by anyone’s standards. Or is it?

You might probably be asking how in the world he was able to do it. His strategies to pay off mortgage early are quite simple. Here’s how he did it.

He got a teaser rate, which is really a very-low rate in the first two years. After two years, the rate would increase gazillion times (you know what I mean). So, he was on the his quest to beat the bankers and pay off his debt in 2 years.

He dedicated every single dime that passed through his hands to paying off his mortgage. Because he was making a big income during that time, he was able to pay it off in 2 years time.

His problem was solved. He paid off his mortgage early. He beat the bankers. His condo’s value rose than the cost of financing it. He was triumphant. Or so he thought.

Here’s where it gets interesting.

The money he could have invested to the stock market instead of the condo could compounded for so many years, which could give him millions of dollars. Yikes!

He said that he left a fortune on the table by paying off his debt early.

Pay Off Mortgage Early: He Did It In 2 Year.. and Regrets It

When my wife and I were buying are house, we thought of putting down 20% to avoid the private mortgage insurance (PMI) and paying it off early.

Then, we saw this guy’s story and we changed our mind. His story helped us realize what we needed and need to do with our mortgage.

We could pay our mortgage in full in the next year or so, but it wouldn’t be the best idea.

Here are some of the lessons we learned from his experience:

1.  Paying off mortgage early is not always a sound decision

Yes, having debt is not always a good thing especially when you’re talking about six-figure debt. Having said that, paying a big debt fast when you could invest that money in the stock market is even worse.

I have always been an investment-type person and I like investing in the stock market.

Had we put down 20% when we bought our house, which is equivalent to $48,000, to avoid the PMI, we would have missed out the money we could make in stock market.

Yes, there’s risk in the stock market, but historically, the return rate is over 9%.

So, when somebody ask me whether to pay off mortgage early or invest, I say invest.

2. Investing in the stock market is a must

Part of the reason that my wife and I have been able to increase our net worth even when I was the only working and my income was around $38,000/year was because of the stock market.

Over the past couple of years, our investment returns have been 22% or more. Now, our net worth is over $400K and it climbs month after month because of investing and blogging.

It’s a fact that lot of people aren’t comfortable with investing in the stock market since they figuratively are handling their money to a fluctuating market where one can lose or gain money in a blink of an eye.

That’s understandable since it’s money we are talking about.

If you are not comfortable with investing or don’t even know where to start but want to, you can start small by investing cents with Acorns. It’s your bridge to getting comfortable with stock investing. That’s what many people are doing now.

Acorns offers a new concept of investing that’s never been done before. It allows you to invest as little as $0.01. Those cents are invested in Vanguard funds known as the best of the best funds that normally require investors $10,000 or more for initial investment.

It’s user-friendly and easy to install. It only takes a few seconds to get it up and running. You can even set it up once and forget about it.

Frankly speaking, it’s the simplest solution to anyone who wants to invest but are are still holding back. It will roundup your purchases and invest those cents across 7,000 stocks and bonds to improve your return while reducing risk.

Sound great, right? It is, but that’s not all. It will give you cash back offers far higher than those from the biggest cash back sites out there. Plus, you get $5 bonus if you sign up using my link. These are just remarkable.

I’ve only been using Acorns for 7 months and my investment is already around $2,000. My rate of return? It’s 12.5% return in 7 months and that’s without me lifting a single finger. What do banks pay? Banks pay 0.01% per year. See the difference? 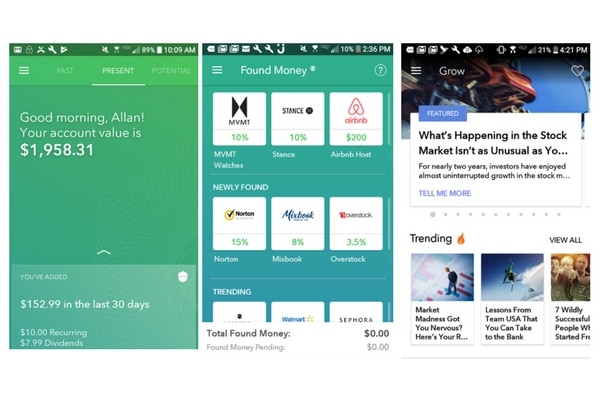 This guy’s story gave me a confirmation that having debt isn’t always a bad thing.

When my wife and I were struggling to pay off our debt and want to live cheap, we took a personal loan and consolidated all our debt. At that time, we got our loan from Upstart with a 2.5% annual percentage rate (APR).

It had the lowest loan rate back then.

While we incurred another debt, we paid off all of our debts that had over 16% APR. We saved thousands of money and paid this personal loan fast.

Had we not paid our debt and not gone with a personal loan, our debt would have not been paid early. We would have also incurred a ton of interest.

If you are looking into taking a personal loan to lower your interest rate and pay off your debt faster, click here to see the best rate that meets your needs.

While everyone has different reasons for paying or not paying their mortgages early, I prefer to pay my mortgage regularly and not make extra payments.

While many say that the most brilliant way to pay off your mortgage is to pay it off early, I say that it would be a better idea to invest money first, get the gains later on, and pay your mortgage in full.

For me, I’d rather invest the money and let it grow.

What are your thoughts about the idea of paying off mortgage early? Are you ok with putting extra payments towards your principal to reduce the number of years you have to pay your mortgage?

How To Save Money

Allan is a recognized personal finance expert, a Level II Certified Cost Estimator, and founder of The Practical Saver. His expertise has been featured in Business Insider, MSN, U.S. News and World Report, Yahoo Finance, NerdWallet, GoBankingRates, AOL Finance, CreditCards.com, HuffPost, Debt.com, Zillow, and Mass Mutual. He was indebted for $40K but paid it all off and saved $70K, at the same time, in 2.5 years under one low income of $39K/year. Now, he enjoys sharing his thoughts and experience on saving money, making money, paying off debt, and budgeting. Read more

Allan is a recognized personal finance expert and founder of The Practical Saver. He paid off his $40K and saved $70K, at the same, in 2.5 years under $39K/year salary.

How To Start Investing When You're Cash Strapped